What Is Big-O Notation?

It's a way to express the efficiency of an algorithm. There are more formal definitions in the context of computer science and math. But this is a fair, intro-level definition for coding problems. Big-O allows programmers to describe the efficiency of their code in a few characters.

Why Is It Important?

Depending on what type of development you do, Big-O may rarely or never come up in your day-to-day. Still, many companies ask applicants to do coding challenges and Big-O may come up then.

I won't make a general comment on whether this is good hiring practice. Some believe it is, some believe it isn't. If it's standing between you and the job you want, it's important. The purpose here is to help you understand it and not stress about it.

Many explanations of Big-O are more formal than we need. They assume a math or computer science background. Maybe you've seen them before and been dissuaded. We're going to explain Big-O for software developers who write code.

What Does 'O' Stand For?

Complexity can refer to the cost of different things.

For the rest of this article, we will only talk about time complexity since it is usually the concern for our coding challenge problems.

From Code To Big-O

As developers, we want to look at a piece of code and find its Big-O. Let's go through that process with this function.

The time it takes to do paper.contains() multiplied by the number of papers.

It gets the idea across but it's clunky. Let's replace the phrasing with named variables and a multiplied-by symbol.

Much better. Let's keep reducing. We'll replace number_of_papers with something general – n. N will represent the size of the input. It could be number_of_papers, numbers_in_sequence, items_in_an_array, etc.. It's a general term for how much data the algorithm will process.

What to do with the time_to_do_contains variable? It's specific to our algorithm so it needs to go. Again, let's replace it with something general.

For any algorithm, there will be an operation happening alongside the data. Big-O implies operation_time so we can omit it. Now we have a very simple expression.

Wrap it in O() and we have our Big-O notation.

In conversation, you could say this a few ways. That algorithm runs in n time. This solution is n. That solution is Big-O of n. It has a runtime of n. Different ways to say the same thing.

Nice, we've analyzed our first piece of code and found the Big-O.

We can call these Big-O notations runtimes. O(n) is a runtime. It is a very common runtime because it emerges whenever we loop through all items in an array. Finding the smallest or largest item in an unsorted array is O(n). Processing each item in an array (map) is O(n). Summing and averaging arrays (reduce) are also O(n) runtime.

O(n) is also referred to as linear time. The runtime scales one to one (linearly) to the data size.

There are some other common runtimes out there that are worth knowing. Once we have familiarity with them, finding Big-O becomes more of a multiple-choice problem. We can look for patterns rather than analyzing code from scratch.

Let's find the Big-O notation for this function.

We can describe the runtime in English as:

We'll reduce the English phrasing to variables and symbols.

Let's use n for the data size variable as we did before.

Then omit operation time because it's implied in Big-O.

We can rewrite a number multiplied by itself as that number squared. And with that we're at Big-O notation:

In conversation, you could say this a few ways. That's an n squared runtime. That's a quadratic algorithm. This solution is n squared.

The dead giveaway of O(n^2) is the nested for loop or the "i j" loop. It's a slow runtime. It doesn't scale well when n gets large. Many O(n^2) runtimes are naive solutions for problems that could be solved more efficiently.

Next let's look at a runtime that's really efficient.

O(log n) is faster than O(n). That may seem weird at first to think that something can be faster than O(log n). But if we visualize an example it's clearly possible and it's very important.

In the game 20 questions, one person in a group thinks of something. It could be absolutely anything. Any person, place, or thing. The group can only ask 20 yes or no questions to find the exact thing the person is thinking.

Without a logarithmic way to drill down the data set, it would be almost impossible for the guessers to win. If the "asking questions algorithm" was O(n) you would have a 20 in n chance, where n is all the data in the person's brain. But if you ask good questions it is like O(log n). Then it's pretty easy to win.

Are you thinking of a person? Yes. Is the person fictional? No. Is the person alive? Yes. Is the person famous? Yes. With those four questions, the data set went from the person's entire brain, down to 5,000ish possible famous, living, non-fictional people, they'd be able to think of. That ability to quickly narrow down a brain-full of information has huge implications.

Here's the 20 questions game in code, except it's really boring because it's sorted numbers instead of a person's brain. But it's very efficient.

It only takes 20 times through this loop to find K from an array of a million. 30 times through and we could find K in a billion. That is very efficient.

When thinking of O(log n) think of binary search. Think of cutting a data set in half like the 20 questions game.

O(log n) is the inverse of O(n^2). In O(log n) time the data set could be enormous and the algorithm can still run in a reasonable time. In O(n^2), the running time becomes unmanageable when the data set becomes large.

This is the most complicated runtime we'll cover. It is a combined O(n) and O(log n).

For each n we need do an operation that is log n. As far as efficiency goes, this is faster than O(n^2) but slower than O(n).

This runtime is seen in sorting algorithms like Quicksort and Mergesort.

Let's analyze Mergesort and see why it's O(n log n)

Disclaimer – We're going to stick to a simplified explanation here. There are algebraic ways to prove this is O(n log n). There are also recursion tree drawings to help visualize and prove it. Those are too in-depth for this article.

Divide and conquer is a useful simplification for this level of overview. Divide (split) is O(log n). Conquer (merge) is O(n). Not all divide and conquer algorithms are O(n log n) but when the conquer step is O(n) you can be pretty sure the whole algorithm is O(n log n).

We won't cover these in-depth but just plot them on our landscape of common runtimes. These are the most inefficient runtimes of all. Exponential is the second-worst and factorial is the worst. When n gets sufficiently large these will take thousands or millions of years to complete with today's computers. There are problems whose only general solutions are factorial or exponential. The traveling salesman problem is the most famous one.

We're wrapping up with an easy one. Constant time is written as O(1). With constant time it doesn't matter how big the input is. It will always take the same amount of time. Here are some examples:

From most to least efficient, here are the Big-O runtimes. 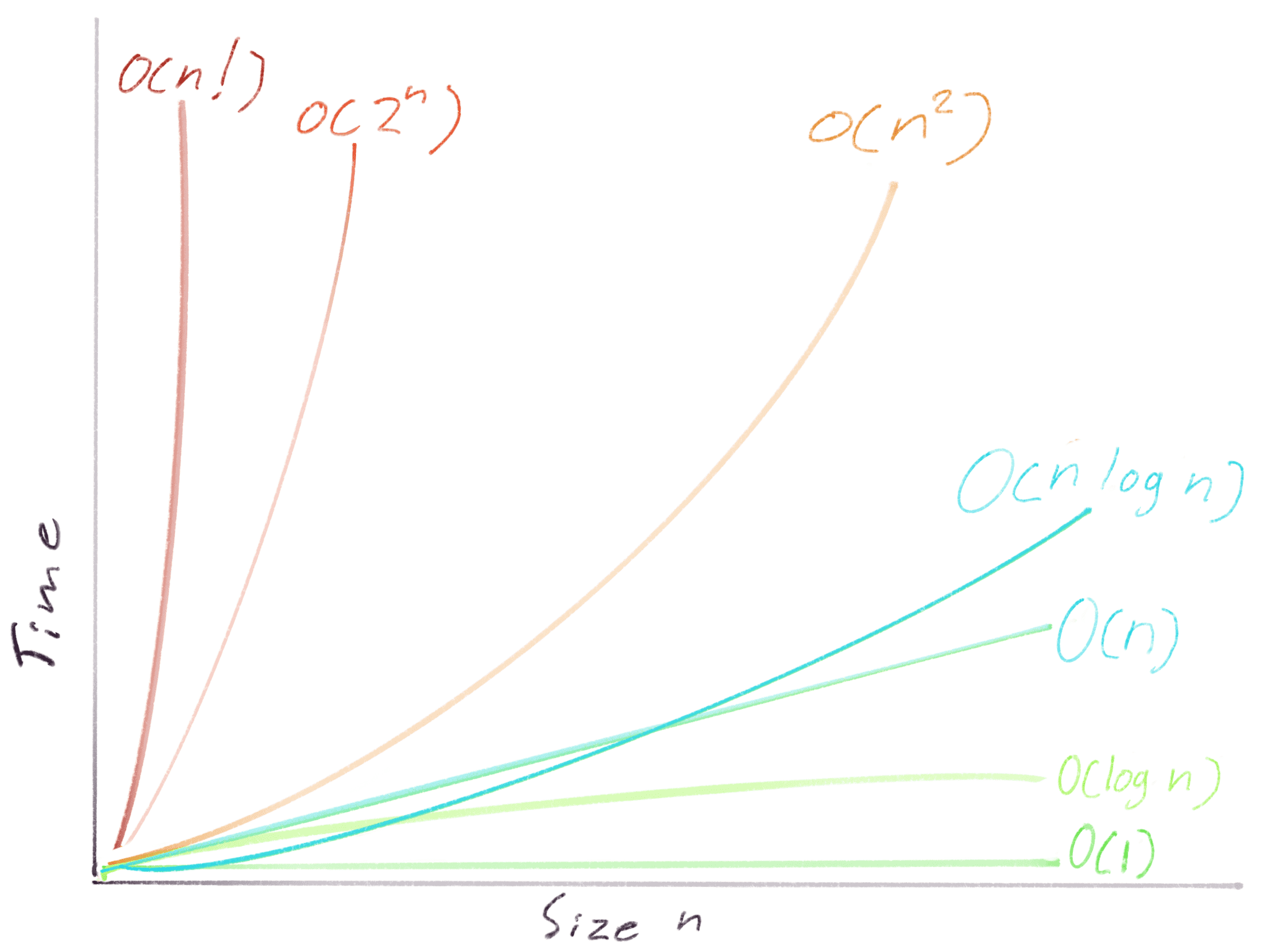